English Home > About Us > Financial Strength 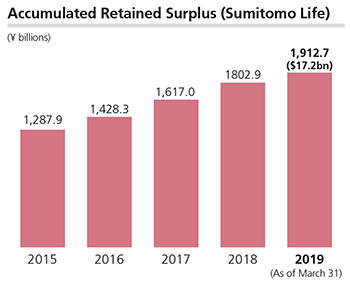 Accumulated retained surplus (Sumitomo Life)* increased ￥109.8 billion in fiscal 2018, to ￥1,912.7 billion (＄17.2 billion).
We will continue to reinforce our long-term financial strength by accumulating surplus while maintaining a good balance with the distribution of dividends to policyholders. 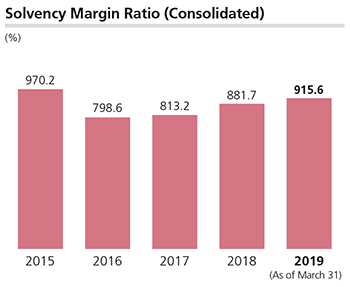 The solvency margin ratio is the ratio of total solvency margin to total risk amount, which quantifies various risks. Our solvency margin ratio was 915.6% (consolidated) at the end of fiscal 2018. The ratio far exceeds 200%, the level which would require administrative-intervention in Japan.
In anticipation of the introduction of an economic value-based solvency regime, we are making efforts to control risk and accumulate retained surplus referring to the Solvency II Framework of Europe and the trend of international capital regulation. 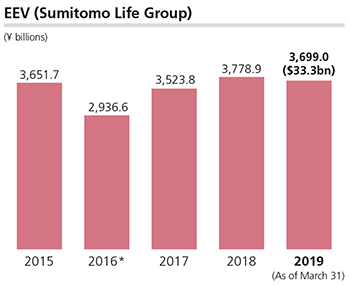 The Sumitomo Life Group’s EEV at the end of fiscal 2018 decreased ￥79.8 billion year on year to ￥3,699.0 billion primarily due to negative impacts from lower domestic interest rate and stock prices, despite the positive results of the insurance business such as acquiring new policies and securing earnings from policies in force.